Once the animal herds of the Great Migration reach the southern part of the Maasai Mara, they must cross the Mara River to reach the fresh grazing areas of the Mara Triangle in the northwest.  The herds instinctively mass along the river bank, circling, jostling, and raising clouds of dust until “critical mass” is achieved.  At some imperceptible signal, the animals in front tentatively approach the water.  As others follow, pressure builds until the lead animals finally plunge in and cross the river, swimming, then scrambling up the opposite bank to safety and fresh grasses.

Chaos reigns as the herds charge down the river bank and enter the Mara RiverPhoto by justinecarson.com

Crossings can have as few as a hundred animals or as many as tens of thousands.  For the largest crossing that our group witnessed, our guides estimates ranged from thirty-five to fifty thousand.  Wildebeest make up the majority of the herds, with zebras and various species of antelope participating as well.

Individuals can be separated from their family groups during the chaos of the crossing; sometimes a few animals will cross back, swimming against the tide.  Once most of the animals have crossed, loss of momentum may leave a group of animals behind on the far bank where they will wait until joined by new herds and critical mass is again achieved.

A few Wildebeest defy the herd momentum and return to the east bPhoto by justinecarson.com

Above, a small group of Topi join the wildebeest and zebra herds. Below, just a few more leaps and they are across! 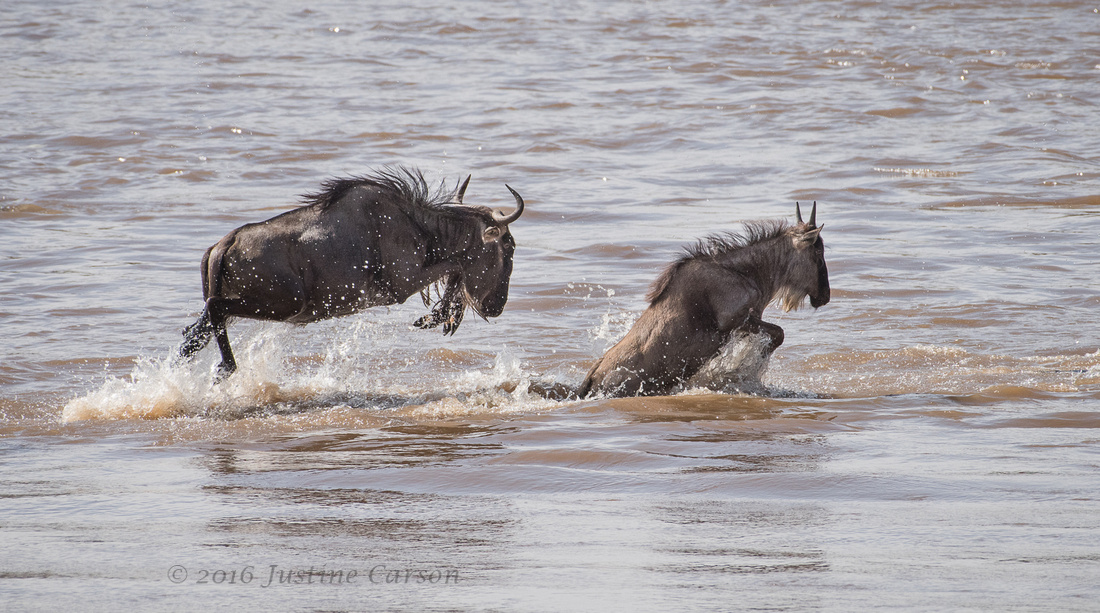