It wasn't easy to become a fan of Oracle Team USA.  First there was the cheating thing. (The US team was penalized two races for a cheating incident a year ago, forcing them to start the America's Cup competition at minus two.)  Then there's Larry Ellison. Let's say he's not the most popular billionaire in the Bay Area. Then there was the failure of the race to attract more than a few competitors.

All that was forgotten in the final week of this very memorable America's cup. I started out by watching the races on TV and quickly became hooked by a most unlikely comeback. With the US team down 8 races to 1, it looked like New Zealand would take the cup in a rout. But Jimmy Spithill and team kept their cool. They didn't whine about the penalty. They didn't make excuses. Larry Ellison kept a low profile and Team USA figured out how to sail their boat.

When the contest came down to a winner-take-all 19th race, I decided I had to get down to the Bay to watch the outcome. I got there early, before the Pier 27 gates opened at 10:00 AM and staked out a spot near the finish line. It was a great day to hang out by the Bay. The race started on time at 1:15 -- no delays because of not enough or too much wind. I got a chance to see those amazing boats (as tall as a 13-story building) fly across the Bay at speeds over 50 mph.  Less than a half hour later, Oracle Team USA crossed the finish line 44 seconds ahead of the New Zealand boat in a truly amazing come-from-behind victory. 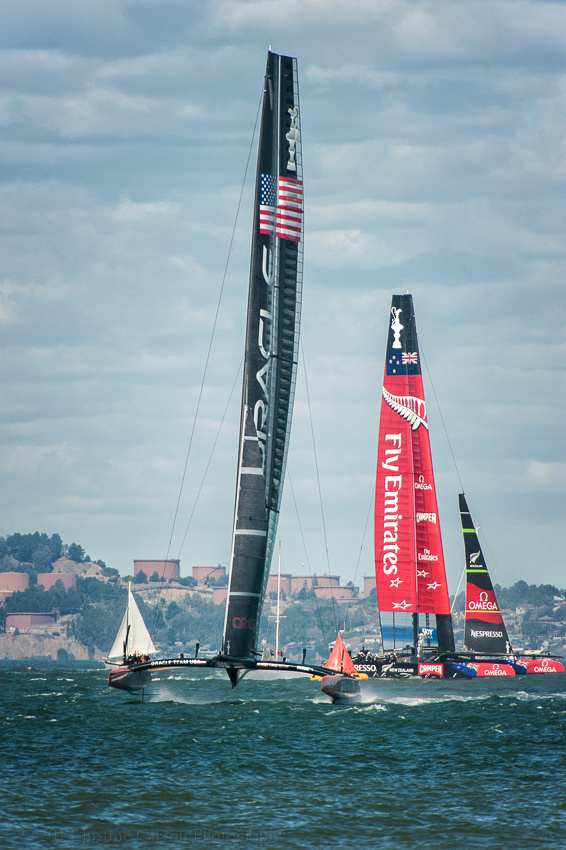